Unit Testing frameworks are mostly boring – if they are any good, they follow the rough approach of the x-unit family that Kent Beck introduced with smalltalk. And in languages like ruby or even Java they are quite comfortable and can make use of the runtime introspection capabilities, mostly to automatically discover your test cases and execute them. Not so in C++. And the test frameworks here always feel a little clumsy. CppUnit has an arcane way of writing and registering your testcases. I was a user once, never again. As so often boost has a superior solution (Boost.Test) but it’s reeeeeeeally a pain to set it up – so I ended up not using it either.
A noteworthy exception to the depressing C++ testing landscape is gtest, googles own testing framework for C++ that aims at portability and ease of use. It heavily relies on macros to provide kind of a nice syntax and automatic test registration. It’s light weight, extensible and works on most platforms out-of-the-box. It has become my default turn-to solution for writing C++ unit tests. Digging into it’s features reveals that it is capable of rather non standard niceties like repeatedly running the test cases while randomizing the execution order, running a subset of your tests (using exclude/include patterns on invocation) or turning assertion errors directly into debugger break-points.

Enter the world of Catch

I just found out recently about Catch while watching someone explain a piece of code along with it’s tests. The first thing that kind of sticks out is that the tests seem to have a very clear visual outline. That might seem silly but when looking at a piece of code I really like it when I can get a feeling for the program structure merely by the outline of the text of the program. And that is caused by one of the most intriguing aspects of Catch: rather then to use the classical setup – test – teardown cycle, the test-cases are organized into nested sections. The inner-most sections (the leaf-sections) are the actual units under test, and they are executed along with their enclosing sections. That immediately allows to reuse setup and tear-down code – on multiple levels.
What I found is that my test cases got considerable shorter since a lot of times there is some common setup steps or even test steps that are actually duplicated in a couple of test cases. The classic one-setup-approach is just not enough here. The image shows the outline of the tests before and after porting them from gtest to Catch. 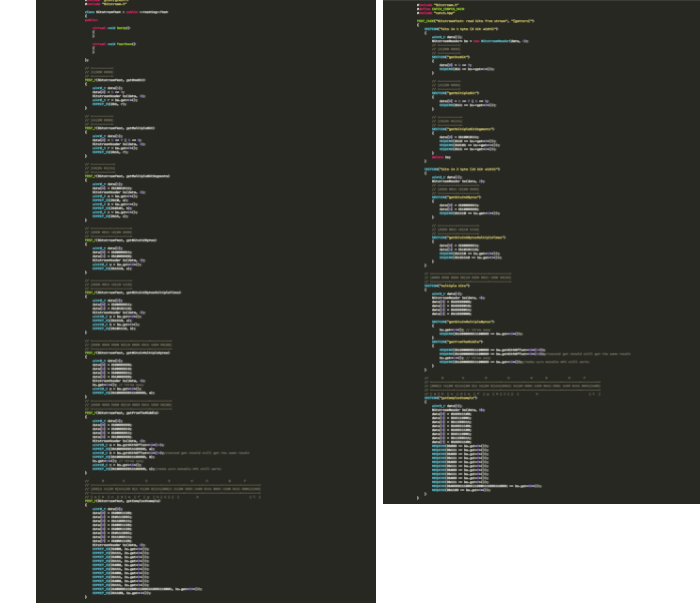 One thing C++ programmers (or at least me) envy in the javascript/nodejs community is the uniform and quick way to start a project and add the dependencies. It’s quite common to check out a project from github, do a quick npm install and have all dependencies installed in the local project directory within seconds.
Catch is a header-only library (thanks!!) and getting up to speed is just as fast: wget the latest all-in-one-header file, add 2 lines to your test file, and everything is ready!

No need to derive from a Test-Base class or anything like that. Pretty much just include the header, request a predefined main function, and write your test-case.

Quite amazingly the section-based design lets you use a BDD-flavored syntax without having to add any implementation. Here is an example of how it can be used:

SCENARIO is merely a synonym for TEST_CASE, GIVEN and WHEN are synonyms for SECTION. So simple but results in a beautiful DSL.

Simplicity all the way

In contrast to other Unit-testing frameworks, Catch does not offer the usual selection of assert macros but manages to get away with basically just 2 kinds: REQUIRE and CHECK. REQUIRE evaluates a boolean expression and stops the tests as soon as there is an assertion failure. CHECK does the same thing but keeps the tests going, reporting what went wrong in the end. And the reports you get are even really specific, not just something like the ”…expected True but was False…“ kind of junk.

With the executable you get a decent command line parser built in that gives you a lot of options. Rather then to just execute every test-case, you can select the cases to be executed using a simple glob-like pattern (e.g. put* matches tests starting with put, ~put* everything else).
Another option I really like is the --list option, which tells you about all available tests. Almost a little bit like rake -T is used to display the available tasks in a rakefile. --tags is similar but shows the available tags instead (test-cases can be tagged with multiple strings which makes it very convenient to restrict the executed test-cases, e.g. to just run the tests that deal with insertion etc.).
By default Catch is very quiet and does not report on successful test-cases. Sometimes it’s nice to see them as well so you can use the -s or --success option to do so.
There are a lot more options to explore, here are the ones of the current version:

Give it a Try!

Catch might not be the test-framework with the most features but it certainly brings a fresh new approach to the table. It’s trivial to setup and use and that alone should be a reason to use it. From the limited time I spent playing with it I already found it has given me some nice benefits. I plan to use it even more in the future.

Edit: Someone made me aware of UnitTest++. I had a brief look at it but immediately bailed when I saw the comment in the docs:

“Pre-requisites: While there are currently some bundled makefiles and projects, UnitTest++ is primarily built and supported using CMake.”